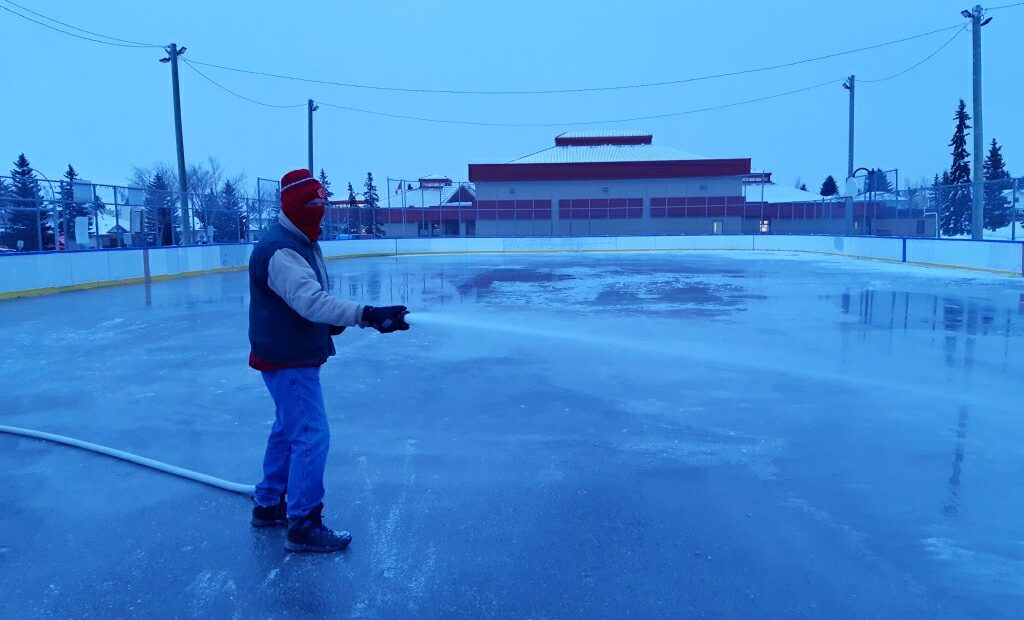 Dale and his wife Debbie moved to MacEwan in 1991 and have enjoyed living in the community ever since. They have two adult daughters now who grew up going to Simons Valley elementary school and playing sports in the community.

Dale got started with volunteering in 1995 as a youth soccer coach with MacSand Soccer when his daughters started playing soccer.  Dale has tried to find ways to volunteer in the community ever since.  His wife Debbie was the treasurer for the community association for many years as well.

Dale’s main role over the past couple years has been assisting with the Rink Rats, a dedicated team of volunteers who maintain the two outdoor community skating rinks in Sandstone during the winter. He really felt that they were making a difference in contributing to everyone’s physical and mental health during covid by keeping up the community ice rink and giving people an outlet to get outside in the fresh air and get some great exercise right within our th community. It was very gratifying to see so many young families getting out with their kids and skating!

Dale is hoping to get in an end of year ice rink flood in the late winter where the weather is ideal and not too cold, so the Rink Rats can get a “team picture” in Bermuda shorts. Maybe next year you can be part of that picture!

Thank you Dale for all the hard work and dedication you have for the Sandstone MacEwan Community Association!

Willa joined the SMCA board in April 2012. She was trying to find a way to make some friends in the community. She wanted to give back as so many Canadians helped them when they first immigrated to Calgary. Willa is the secretary on the executive committee since she started in 2012. She diligently takes the minutes at all meetings and does a lot of other paperwork required of the board. Willa has been the Community Clean Up coordinator since 2019 which is always a very popular community event. She is also back up for the Casino director when required. Willa is very positive and willing to help out on whatever is needed on the board.

Willa’s family immigrated to Canada in 2010 and settled down in Sandstone Valley. Willa and her husband raise their two girls in Sandstone which they consider their second hometown. This is the eleventh year she has lived in such a quiet, safe and happy community.

Willa first impression of SMCA was the enthusiastic volunteer spirit which inspired her to volunteer. She has made some good friends from volunteering and learned a lot from others. She is proud to be part of the SMCA board and she has a lot of fun with all the other dedicated volunteers in the community.

The challenges she faces volunteering is she works full-time as many other volunteers.  Sometimes it is difficult to balance volunteering, working and raising a family however she is successful managing all three.

Willa would like to share a recent inspiring story. At this years compost day which was extremely popular, a father brought his son and daughter to volunteer with him. They shoveled dirt and filled buckets for two hours straight while his son pulled the wagon hauling full buckets to residents’ vehicles if needed. Their actions warmed her heart that day. She feels lucky to be part of SMCA.

Willa would like to invite you to volunteer in the community and work together to make it better.

Community handyman Bradley Beckett has lived in Sandstone since June of 2000.  He is lucky to share his life with his lovely wife, Celine and busy 11 year old twin boys.  Brad has volunteered since about 2015 with the SMCA with the planters and other miscellaneous things for the board.

His main responsibility which he puts in a lot of hard work and effort is putting in and maintaining the ice at the pleasure rink.  During winter you may find him there various times of the day or night.  Brad enjoys volunteering with the community association as it brings the community together.  It is a small group of people filled with many challenges.  He finds it to be a great way to spend some time with friends and have some laughs.  If you want a reason to get out and meet some great people then try volunteering.

Through volunteering you may be able to meet some great people or learn a new skill.   He has had new volunteers come out that have never been around equipment and had a great time learning how to use it.  Through his volunteer work Brad has met a number of people from throughout the city.  He has been able to have some great conversations with some very interesting people.

He enjoys watching people get out and use the pleasure rink.  It justifies the hours put in as a volunteer keeping the ice skateable. One such story from the past year did put a smile on Brads face – “Myself and another volunteer were watching a 3 or 4 year old shoot a block of ice around with his hockey stick.  We asked him if he wanted a puck and his mom said sure.  Upon receiving the puck he grabbed it, dropped to his knees and held the puck above his head and screamed “I have a puck” about ten times.  He was elated.  Five minutes later his friend showed up and they were both excited to have a puck.”

Thank you Brad for all the hard work and dedication you have for the Sandstone MacEwan Community Association.

Pinky has lived in Sandstone for 28 years with her husband Phil and their daughter and son.  Pinky joined the Sandstone Community Association board 26 years ago. She was on the board when it merged with the MacEwan Community Association. Pinky has mainly been the casino director all these years. She has excelled in this role especially to gather enough volunteers to work at the casinos as this is the community’s main fundraiser.

You have probably meet Pinky if you went to the Dump your Junk event or Sandstock as she is always encouraging residents to purchase a membership.  In the early years on the board, she was involved in the children’s’ programs and even served at the president for two years. When her daughter started school at MNA, she met other parents on the community board and mentioned she was on past community boards. Of course, the next thing she knew she was recruited to the board. Pinky was impressed how well the board operated and with all board members sharing the same drive to make their community the best it could be. Pinky fondly remembers all the great people she has met through the board and still remains good friends with many of them today.

For years, Pinky continuously volunteers on other boards however her favourite is the SMCA board as it directly impacts her and her neighbors. She’s proud to look around Sandstone and MacEwan and see the many things the board has done over the years knowing that she was part of it. Pinky feels that volunteering on the SMCA board is a small commitment but very rewarding as it is a great team and would be even better if more residents joined. She wish’s more people would buy a membership to show their support to the community association as the membership numbers are at an all-time low.

Pinky says she has a few more years to remain on the board however traveling will take up more time now that they are both retired. If you see Pinky in the community, please thank her for all her hard work over the years to make this community a better place to live.

3. How long have you volunteered with SMCA?
I started volunteering in 1992 with SMCA.

4. Do you have a main volunteer role in SMCA?
I have been a rink volunteer the whole time. I used to clear the ice but now I mainly maintain all the hockey rink equipment. I was a mechanic by trade so it’s more like a hobby.
When we first started to clear the ice, it was a much more manual process. We used to put our skates on and clear the ice with these homemade push shovels then someone would shovel the snow off the ice. All the equipment was stolen about ten years ago so now we have proper snow blowers and snow sweepers to make the job easier.

5. What was your first impression of the organization?
The organization is much stronger now. In the beginning, they had no equipment and everything was manual. There were even a few years that the rink was left abandoned as the water hydrant broke. Darren W got the hydrant fixed and organized rink volunteers. Now Trevor Bacon is a strong leader to coordinate all the volunteers and create a schedule for flooding times. I believe it depends on having a strong leader to organize the rink.

6. What do you find most challenging about volunteering here?
No challenges as it is well organized.

7. Tell me about some of the people you’ve met while volunteering.
I think the rink volunteers have the same goals or ambitions as I have. They love to see young people out skating. It seems now that many volunteers were involved with minor hockey before the pandemic so now they still want to come out and be involved in hockey. Some of them were coaches and assistant coaches.

8. What would you tell someone who is thinking about volunteering?
You are very appreciated and hockey players often skate over to thank you for taking care of the ice. You get that reward and have fun with the other volunteers plus you get exercise.

9. How would (someone) describe you?
I am an outgoing person.

10. What else can you tell me?
I get a lot of joy in seeing how many people are playing hockey these days as the rink is really busy. Young kids and young adults alike. I think it is kind of sad when kids are so involved in the minor hockey association and then it ends for most kids unless you go onto junior hockey. You can join master hockey teams again in your mid thirties so the rink helps those years in between.
I grew up in Grimshaw, Alberta and hockey was always a part of my life. In our small community, people just came together and made outdoor rinks with whatever materials they could find.
I also had a back yard rink in Sandstone for my two sons and daughter who all played hockey. My oldest son played Alberta Junior hockey then onto college hockey. I was a hockey coach off and on for all three of his kids with CNC (Calgary North Central) and Simon Valley Hockey. I was a vice president on the Simon Valley Hockey board when it was first started.